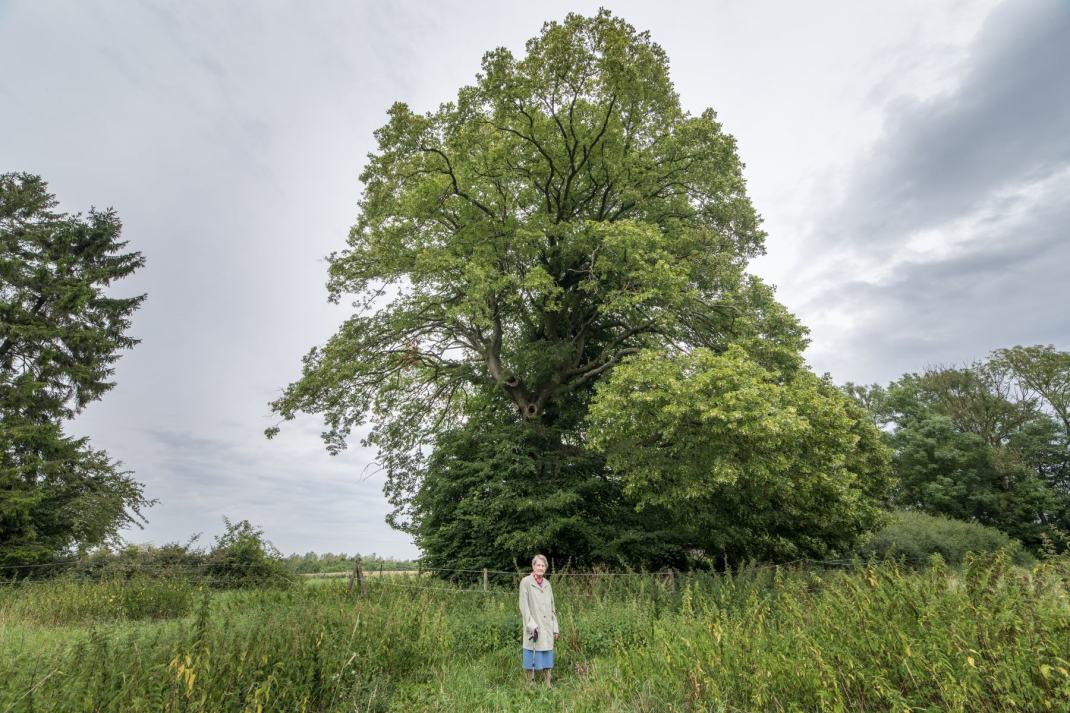 As of February 1st, voting for the 8th annual European Tree of the Year competition is open. This year there are 13 monumental trees from 13 countries all around Europe, with Croatia, Portugal, Romania, and Russia making their first appearances. Each year more than 200,000 votes are tallied (you can vote for up to two trees), so check out the nominees below and get out the vote!

Like here at the Treeographer, the competition is looking for much more than just a pretty face (or canopy, rather). Here is how the organizers describe their goals:

The European Tree of the Year is a contest that highlights the significance of trees in the natural and cultural heritage of Europe and the importance of the ecosystem services trees provide. The contest is not looking for the most beautiful tree, but for a tree with a story, a tree rooted in the lives and work of the people and the community that surrounds it.

Without further ado, here are the nominees and their stories.

The Lime of the Old Country

The lime tree of Vî Payîs (‘Old Country’) in Bioul, the largest small-leaved lime tree in the country, is one of the most outstanding trees in Wallonia. The roles that have been attributed to it, as nobility or a landmark, have died out over time. The fact that this tree has resisted all assaults and threats can only be understood as a collective desire to preserve it as a symbol or parcel of memory. It continues to be the subject of attention and admiration by the population. 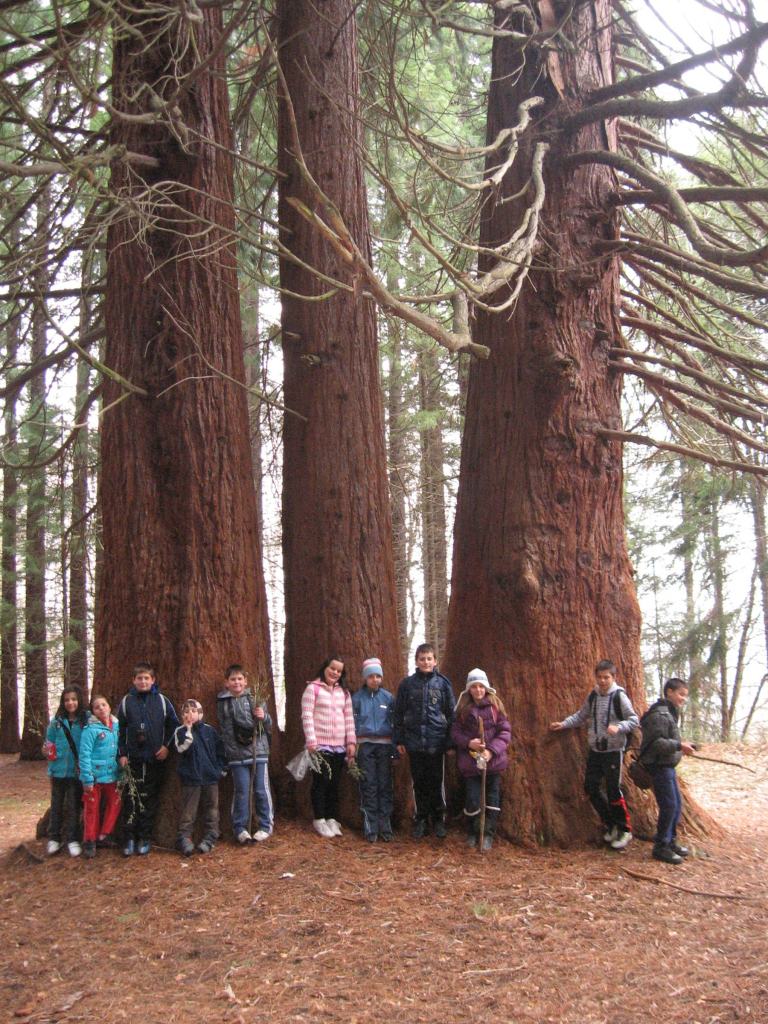 3 magnificent giant sequoias are located near the village of Bogoslov in Kyustendil. They are part of a naturally formed sequoia forest and are a natural phenomenon. Sequoia seeds were first brought to Bulgaria by the renowned forester Yordan Mitrev at the end of the 19th century. These are the oldest and tallest sequoia trees in Bulgaria. They have an important place in the history of forestry. Many people from the region and the country would visit the site to hug the trees and benefit from their energy.

The massive plane tree – the symbol of Trsteno

A living witness to the past of Trsteno

The massive plane tree, the symbol of Trsteno, is a protected park architecture monument. Its beauty, size and age make it a popular tourist attraction. In the early 15th century, the sapling was brought from Constantinople by Captain Florio Jakob Antunov, who planted it next to a spring. The tree has survived all would-be conquerors – Turkish invaders, Napoleon’s army and Russian troops – thanks to the mild climate, the life-giving spring, and the care of the locals entrusted with its survival.

The Gem in the Park

In 1790, Jan Nepomuk, Count of Lamberg founded a park where a black walnut was planted among other trees. Leopoldina Thun, born Countess of Lamberg, had a wooden chapel built under the tree in memory of her father who drowned in the Morava river. After the park opened to the public, the place became a destination of frequent spiritual visits. The tree was in a very bad condition caused by floods in 1997, when the park was under water. Thanks to professional intervention, however, the walnut tree recovered and is still the gem of the park. 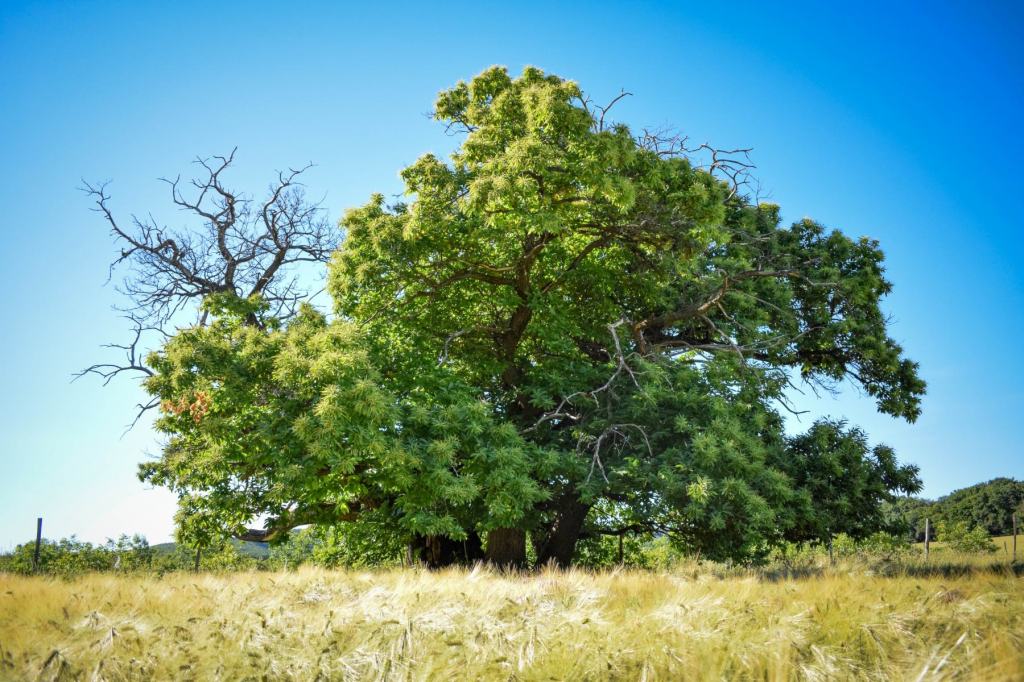 Zengővárkony is famous far and wide for its ancient sweet chestnut-wood, which embraces the small village of 400 souls. Chestnut was the source of growth for the locals; therefore they lovingly cared for the trees. As centuries have passed, the tree has healed from crustal cancer, survived nationalization after the war and even once being set on fire in a cold winter. For the locals the 300-year-old chestnut tree is the symbol of continuity and its desire to live gives strength to them.

The Witches Spruce is 34 m in height, its 18 trunks (one of which was broken in a storm in 2007) branch at 80 cm, giving the appearance of tangled witch’s hair. One legend says the witch’s broom turned into the tree because she met a local man she liked, and forgot to fetch her broom until midnight. Another story tells that Napoleon cut off the top of a small spruce while he was riding a horse, and it grew back into its strange shape as a result. Many legends have been captured in children’s drawings.

‘No tree becomes rooted and sturdy unless many a wind assails it’ (Seneca the Younger).

Helena, a natural monument, stands in the most beautiful part of Poland, unique in Europe. The name of the poplar was not chosen randomly. It emphasizes the identity of the place it grows in. The tree has witnessed many events and transformations in the community of Hel. Its life is related to the drama of warfare and the heroic defence of Hel. Like the queen of the surrounding landscape, the poplar towers majestically along the path leading to the headland. 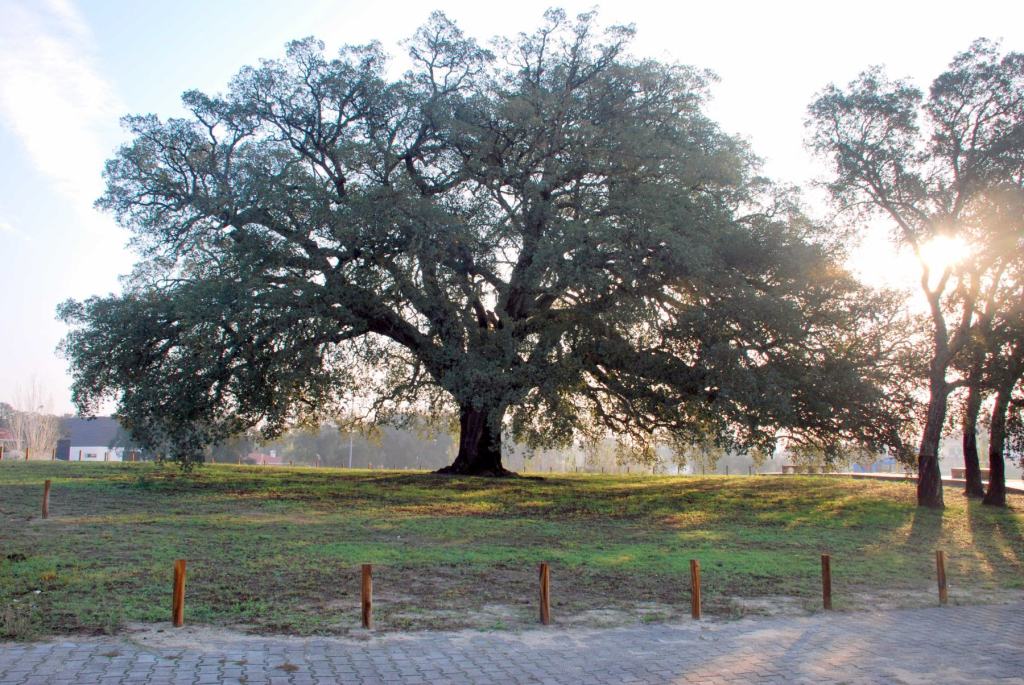 The Whistler owes the name to the sound from countless birds that lay on its branches. Planted in 1783 in Águas de Moura, this cork oak has already been stripped more than twenty times. In addition to the contribution to the cork industry, it has huge relevance for ecosystem services and fighting climate change. With 234 years, the Whistler has been classified as “Tree of Public Interest” since 1988 and is registered in the Guinness Book of Records: “the largest cork oak in the world”.

See more photos and vote for this tree here! Also check out the Treeographer article about this tree for even more information and history. 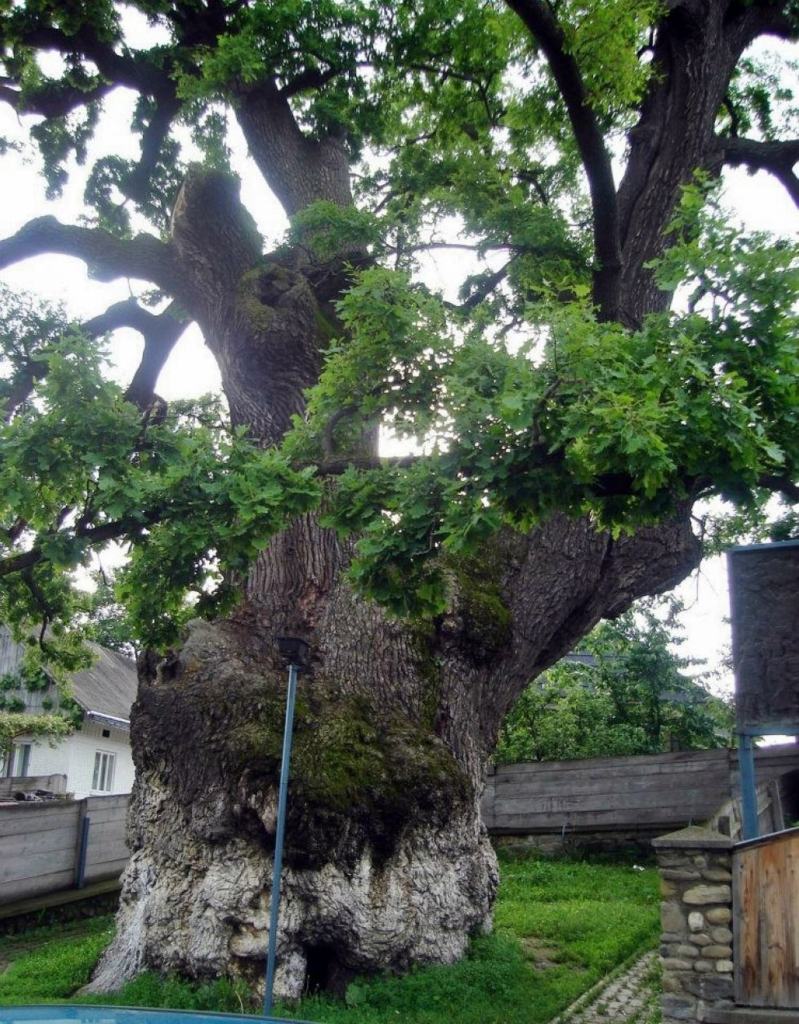 Local inhabitants believe that this tree dates from the time of the great Tatar invasion (1241), when all the people from the area died in battle. They would have been buried in a common pit, at the site of which this oak was planted. According to another legend, in 1476 Moldavian Prince Stefan cel Mare, accompanied by his soldiers, rested in the shade of this tree, where they were served with a fresh cheese – caș in Romanian,hence the name Cajvana.

The oak called “the Elder of the Belgorod Forests”

The oak called “the Elder of the Belgorod Forests”

This oak grows in an area of special environmental protection. It is a National Natural Heritage Monument that has witnessed many historical events. Under its crown there are public events and celebrations held. This tree is an object of special admiration for children. For them, the oak is a symbol of friendship, good health and memory of their ancestors. They hold flash-mobs there to form a heart around the tree to send waves of peace and kindness to all people of the planet.

An apple tree that doesn’t give up

The old apple tree is a monument of fruiterers, whose trees grow and bear fruit for over a hundred years. It is a little known, rare and today almost forgotten regional variety. Today, the tree has a beautiful, scarred trunk. But despite its damage, it has an amazing inner vitality. It always blooms richly in the spring and provides an extremely rich harvest of apples in autumn, which lasts until the next summer. When we sit down in its shadow, we can learn from it how to never give up and face life’s challenges.

These 7 ancient elms are considered the last representation of the urban olmedas of Extremadura. Despite the threat of Dutch elm disease(a disease that has killed more than 1 million trees in Spain and more than 1 billion in the world) these trees have managed to remain standing, presiding over the surroundings of the hermitage of the Sanctuary of Our Lady of Belen, of great artistic historical value and with Templar origins. In this area an old pilgrimage has been celebrated since the year 1650. 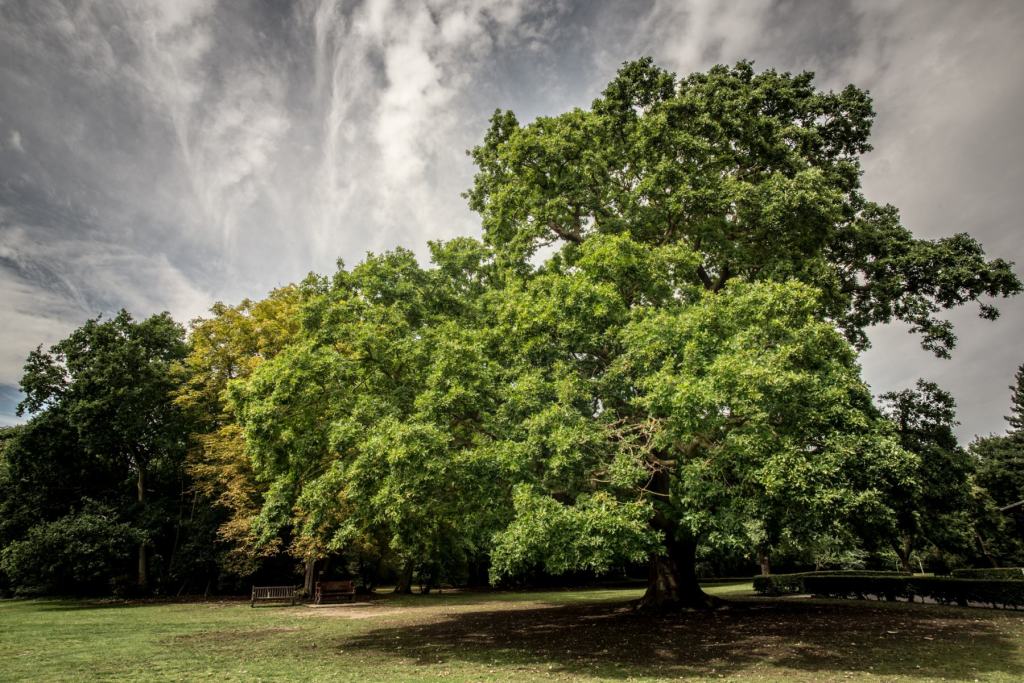 The Gilwell Oak is synonymous with scouting

The Gilwell Oak is synonymous with scouting. It sits at the heart of Gilwell Park in Epping, the home of the scouting movement conceived by Robert Baden Powell. The towering oak was adopted by Powell as a neat analogy in 1929 for not only the growth of the scouting movement worldwide, which began with a small trial camp some 21 years earlier, but as a message to young scouts that big things are possible from modest starts.

If you enjoyed this article, check out the archive for more tree stories. Also check out the Facebook page, with a few extra tree goodies throughout the week. Subscribe below to receive notifications whenever a new tree story is published.