Tucked away just outside of Doñana Natural Park in Huelva, Spain, a small grove of wild olive trees has survived for centuries, even as the landscape around it underwent radical transformation. The Acebuches de El Rocio are a group of 15 ancient wild olive trees located in Plaza Acebuchal in the village of El Rocio. Wild olive trees (acebuches in Spanish) are native to the Iberian Peninsula, and despite their humble reputation, they are much more than just uncultivated olives.

It’s no secret that Spain is home to millions of olive trees. Any road trip through the southern part of the Iberian Peninsula will cross through landscapes dominated by olive groves. Although most varieties of olives cultivated in Spain today were brought over by ancient civilizations thousands of years ago, there is a native variety of olive known locally as acebuche (Olea europaea var. silvestris).

What’s so special about acebuches?

Acebuche is an early species of olive, predating most of the cultivars widely found today. Like common olives, they grow slowly and can survive for thousands of years. However, they have smaller and more oval shaped leaves than most other varieties, and form a part of natural Mediterranean forests alongside cork oaks, carob trees, holm oaks, mastic trees, and others.

Despite this, acebuches are most frequently thought about as just wild olive trees. In fact, when a cultivated olive tree is left untrimmed for many years, it’s said that it ‘becomes a wild olive’ (se acebucha). This is because the olive bearing branches are often sterile cultivars of olive that have been grafted onto hardy acebuches. As the acebuche grows taller, its own branches crowd out the grafted ones below, which eventually fall away.

The olives that acebuches produce (called acebuchinas) are smaller than standard table olives, with larger pits and less flesh. Although acebuchina oil was once prized by ancient Romans,  in recent centuries it’s been largely forgotten. Considering it takes 15-20 kg of acebuchinas to produce a single liter of oil (compared to just 4-5 kg of cultivated olives), it’s no surprise that their numbers have dwindled as farmers move to more profitable varieties of olive.

But there is something special about acebuchina oil. In addition to having hints of both the aroma and taste of wild herbs like rosemary, thyme, and mint, they have even stronger health benefits than those frequently espoused about olive oil. Acebuchina oil contains more than twice as many antioxidants and vitamin E as extra virgin olive oil.

This hasn’t gone unnoticed by the heath food and cosmetic industries, and in recent years production of acebuchina oil has begun to pick up once again. Due to how difficult it is to produce, it’s an expensive luxury product, and like argan oil from Morocco, there are few ways to speed up the process and make it cheaper. 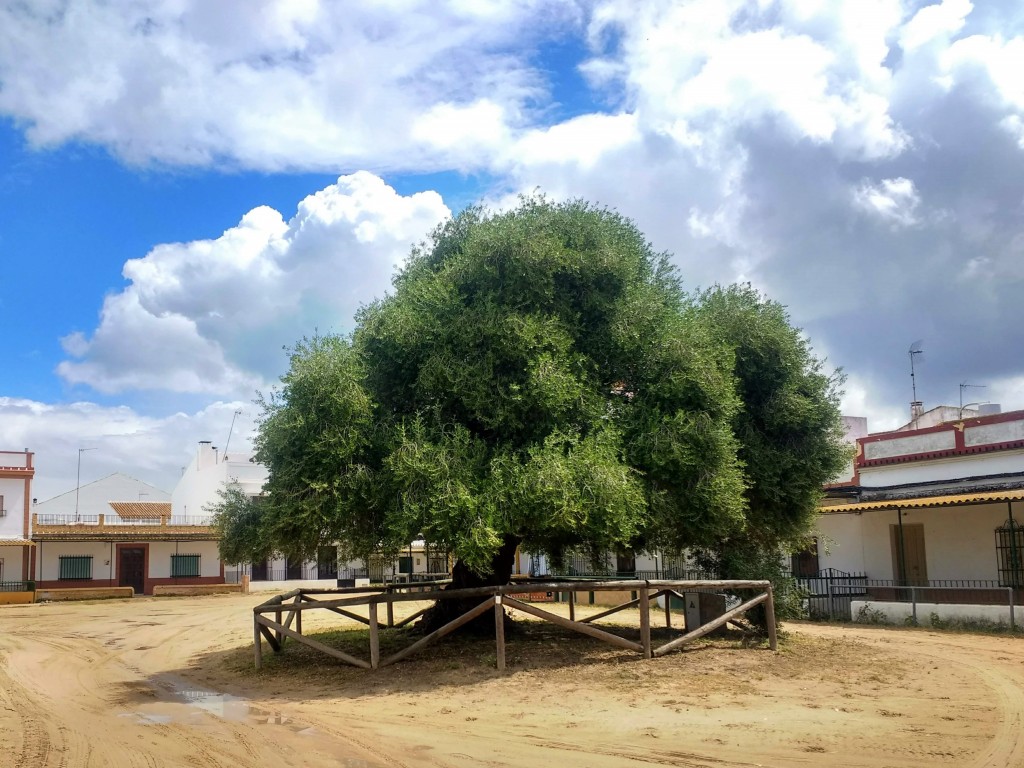 One of the most famous (and readily visitable) groves of acebuches can be found in El Rocio, a small village within Doñana Natural Park in Andalusia. Each of the 15 trees is more than a century old, and the oldest, el abuelo (the grandfather), is more than 700 years old. They were declared a Natural Monument by the Spanish government in 2001.

There is a legend about the trees and their connection to the origin of the village. It says that a hunter stopped to sit in the shade of an acebuche, when he encountered the image of la virgen del Rocío (the Virgin of El Rocio or Our Lady of El Rocio). So beautiful was the image that he inspired locals from the nearby town of Almonte to build a shrine near that location.

The Virgin of El Rocio – Photo by The Treeographer

This story is just that – a story, and the shrine was originally built in the 13th century by Alfonso X after the area was reconquered from the Moors. It has been expanded throughout the centuries, but the current building was made in the 1960s after the previous one was destroyed in an earthquake.

The trees, however, are still where they have been for more than half a millennium, just down the road from the shrine in the Plaza Acebuchal. They provide a glimpse of what the area must have looked like thousands of years ago – a dense Mediterranean forest filled with cork oaks and acebuches. 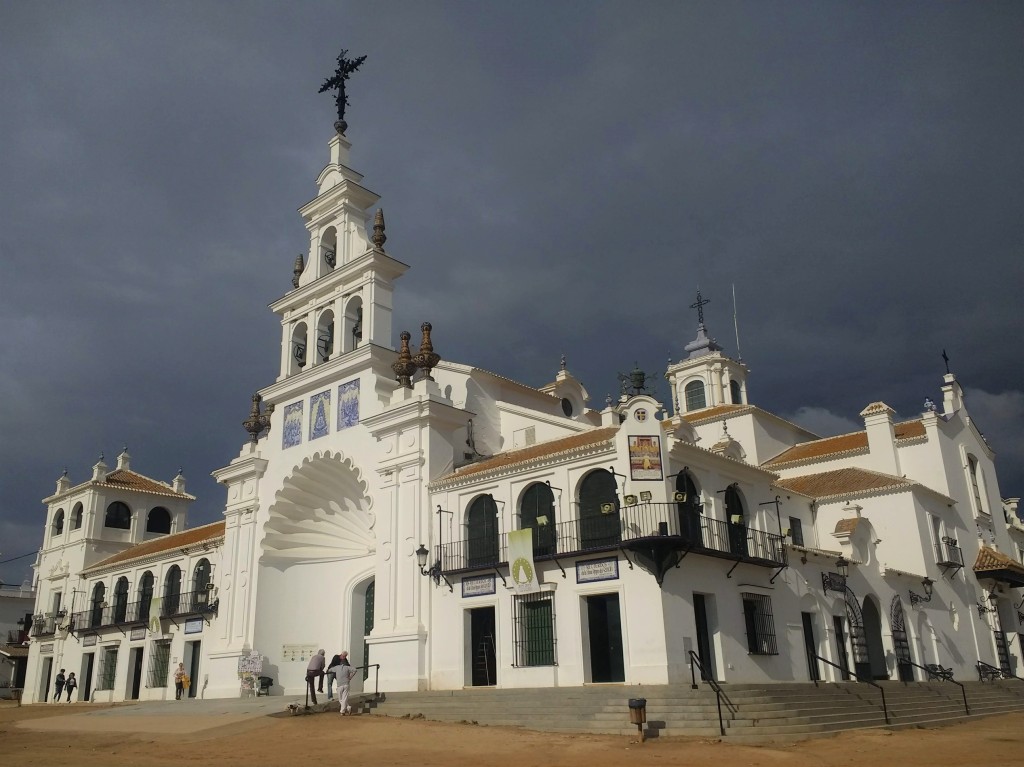 The Hermitage of El Rocio – Photo by The Treeographer

The acebuches of El Rocio form an important landmark in the village, which despite its population of just a few thousand people, sees more than a million visitors to its famous church, The Hermitage of El Rocio.

The village of El Rocio resembles any Wild West town in the United States, with hitching posts outside each building reserved for horses and roads made of packed sand. The similarity between El Rocio and the Wild West makes sense, since the equestrian style architecture was brought over by early Spanish colonists to the Americas. Even so, it marks a stark contrast to the modern cities of Sevilla and Cadiz just a few hundred kilometers away.

Each year just before Pentecost, pilgrims from all over the region make the journey to El Rocio to see La Paloma Blanca (The White Dove), which is an image of the virgin of El Rocio dating back to the original shrine. The pilgrimage (Romería de El Rocío) is one of the most famous in Spain, and pilgrims typically make the trip on foot, horseback, or in a horse drawn carriage.

The pilgrimage is also closely tied to flamenco dancing and music. Pilgrims wear traditional flamenco clothing and sing rocieras, which are flamenco-style songs about the pilgrimage. Rather than a somber religious affair, it’s more of a celebration. When the image of the virgin finally leaves the shrine, it’s a free-for-all as pilgrims scramble to lay a hand on the legendary virgin of El Rocio or collect the sand underneath where it passed.

All three of the paths taken during the Romería de El Rocío pass just by Doñana Natural Park, and the sheer volume of visitors in such a short span of time can put pressure on the unique ecosystem. Residents are aware of this, and efforts are taken to minimize the impact of the pilgrimage. The wetlands and forests of Doñana are home to more than just interesting plant life, with hundreds of unique bird species, including flamingos, imperial eagles, and purple herons, as well as endangered mammals like the iberian lynx.

Doñana is one of the few remaining habitats for the iberian lynx, which was nearly hunted to extinction. For most of history they were considered vermin since their prey consisted of the same animals that hunters wanted to hunt. Recent efforts, including those by the Acebuche Breeding Center in Doñana, have helped increase their population, although they are still the most endangered species of large cat.

A view through time from a single acebuche

Just next to the largest acebuche in El Rocio there is a restaurant, and each year hundreds of thousands of pilgrims and tourists alike stop by the tree to pay tribute and rest in its shade. From the tree, a world of contrasts can be seen: ancient acebuches, Wild West style homes, caravans of pilgrims, and wetlands filled with biodiversity. Not bad for ‘just’ a wild olive.

If you enjoyed this article about the Acebuches de El Rocío, check out the archive for more tree stories. You might enjoy this story about ancient olive trees in the Garden of Gethsemane. Also check out the Facebook page, with a few extra tree goodies throughout the week. Subscribe below to receive notifications whenever a new tree story is published.