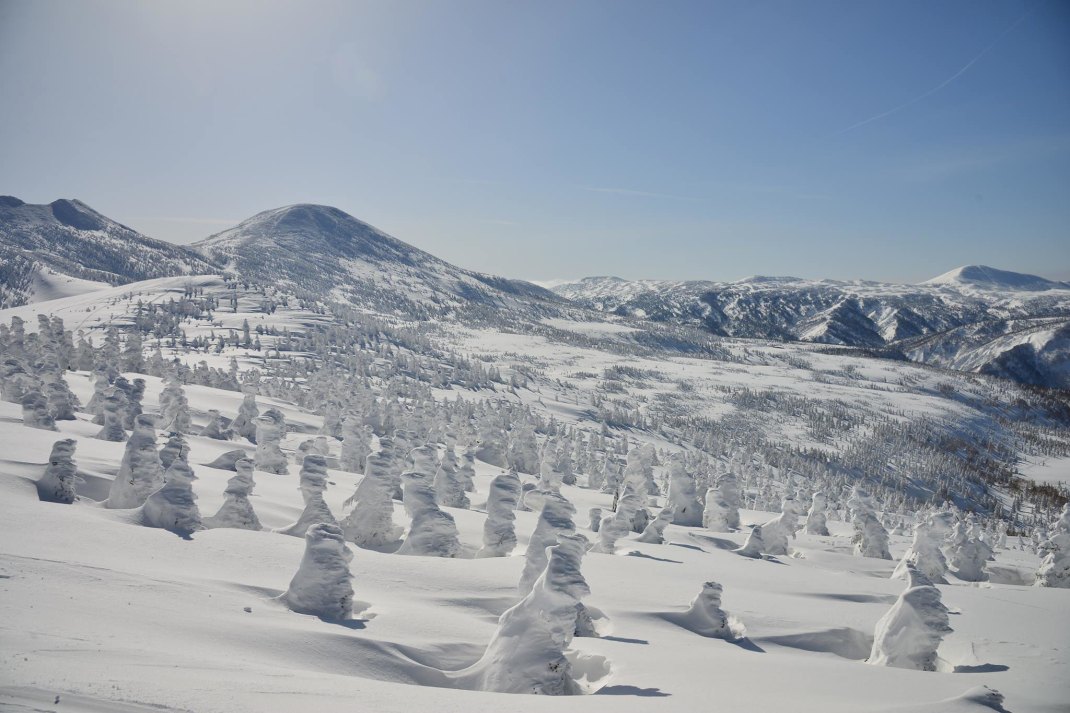 Sasquatch, Yeti, and the abominable snowman have been the stuff of legends for generations, but Japan’s Juhyo (樹氷) are anything but a myth. Each Winter these “snow monsters” invade the mountainous regions of Northern Japan in force, but what lies beneath their crusty exterior is something much less terrifying: Maries Fir trees (abies maresii).

Every year from January to March these large shapes form high in mountains ranging from Hokkaido to Nagano. But the most famous site for Juhyo watching is Mount Zao in Yamagata prefecture, just a few hours north of Tokyo.

When conditions are just right, an entire mountainside of fir trees transforms into hulking shapes ripped from the pages of a dark fairy tale. Like the snowflakes that stick to their monstrous limbs, no two shapes are alike, prompting visitors to let their imagination run wild.

What was once a humble tree could now be a dinosaur, bear, skeleton, or even the mythical Yeti itself.

A delicate balance under threat

What causes these Japanese snow monsters to form is a unique set of frigid circumstances. Cold Siberian winds sweep down across the region, freezing water droplets onto the branches of the native evergreen conifers. This phenomenon is known as rime ice, and while it is rare it isn’t unique to Japan.

But what really brings the monsters to life is a process much simpler than the designs of Dr. Frankenstein. Since the winds are so strong, the icicles form nearly horizontal, creating silhouettes that are hardly recognizable as trees.

When the winds die down, snow sticks to the frozen surfaces, growing the frozen trees into bulky abstract shapes. As this process repeats throughout the season, the figures grow larger and more grotesque.

While Juhyo have been recorded by scientists dating back more than a century, they require precise conditions to form. Without the perfect combination of naturally-growing fir trees, high altitude, freezing winds, and just the right amount of snow, the monsters stay in hiding.

This delicate balance has been disturbed in recent years by a number of factors, the most obvious of which is climate change. Temperatures throughout Yamagata in Winter have risen by 2 degrees Celsius (3.6 degrees Fahrenheit) since 1910, narrowing the window when Juhyo are able to form.

The other dangers are perhaps more pressing. Moths have been eating the trees’ needles, and an invasive bark beetle has been killing otherwise healthy trees. Efforts to repopulate the Maries Fir trees have also been hindered by rodents that eat the seeds before they sprout.

Catch them while you can

Although the snow monsters’ days might be numbered, they can still be visited fairly easily. One of the most popular spots is Zao Onsen Ski Resort, which is located right in the heart of Mount Zao.

There, visitors can ski down the slopes alongside the looming beasts, or brave the harsh conditions on foot and hike among them. For the less adventurous, there’s also a cable car with spectacular views from directly above the snow monster rime fields.

The show doesn’t stop at sundown, either. Every night throughout the season, guided tours are led via enormous snowmobiles. The figures are illuminated by its headlights, creating a surreal scene that’s both wonderful and eerie at the same time.

The snow monsters might not be as sprawling and robust as they once were, but they’re still a sight to behold.

If you enjoyed this article about Japan’s Juhyo snow monsters, check out the archive for more amazing tree stories. Also check out the Facebook page, with a few extra tree goodies throughout the week. Subscribe below to receive notifications whenever a new tree story is published.