Whether called the Chilean Pine, Monkey Puzzle, or Pehuen, the araucaria araucana is certainly a peculiar tree. Chile’s national tree is originally from high in the mountains of Patagonia, but thanks to a strange twist of fate, it’s now common in Victorian gardens throughout the UK.

Long before they were ‘discovered’ by Spanish explorer Don Francisco Dendariarena in the 1600s, monkey puzzle trees were a major part of the lives of indigenous people. The Chilean word for the tree is pehuen, and one tribe’s lives were so closely tied to the tree that they were called the Pehuenche.

Unlike other native tribes, the Pehuenche diet consisted almost entirely of the nutritious seeds that fall from mature trees. Although they can be eaten raw, they are most often toasted, and apparently taste similar to chestnuts. They were also ground into a flour to make bread, and fermented to make a beverage.

Due to its importance in daily life, the tree was regarded as sacred. While beneath the spiky branches of these arboreal deities, it was considered disrespectful to speak, and locals silently collected the fallen cones for sustenance.

When the tree finally was discovered by Westerners, it was likely a shocking sight. The tree looks unlike any other tree on the planet. Its closest relatives, such as Kauri trees and Norfolk Island Pines, are all located in Australia and other nearby Pacific islands. This is because their common ancestors date back to a time when the landmasses were linked into the supercontinent Gondwana.

Their incredibly ancient lineage makes them living fossils, and similar to Ginkgo trees, they lived alongside dinosaurs. Its long, thin, spiky branches were a natural defense against the grazing behemoths. In the volcanic soil of the Andes mountains, they found their perfect home. Even flowing lava and fires are not a problem for them, as their thick bark and reptilian scales are highly heat resistant. 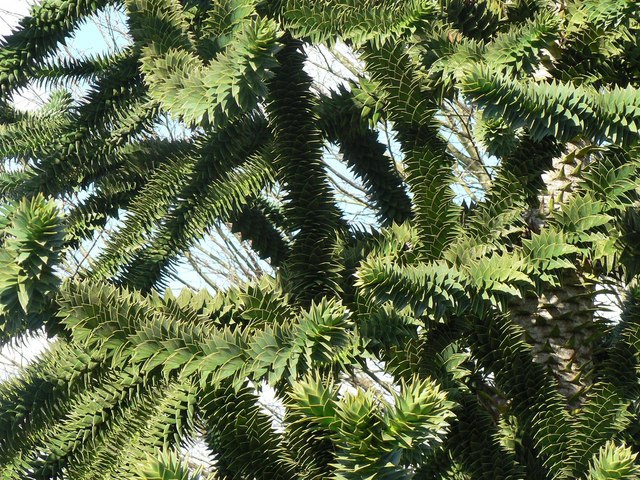 How did the sacred pehuen trees become so common in British gardens? 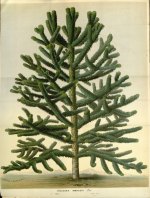 Araucaria first made its way to the British Isles when Scotsman Archibald Menzies was visiting Chile in 1795. Served a strange seed dish at a dinner with a Spanish viceroy, he stashed some of them away and planted them in frames on his return voyage. These first few seedlings were planted at the Royal Botanic Gardens in Kew. Although the last of these first trees is no longer alive, several araucaria trees can still be seen in the gardens.

The true commercial introduction of the plant wasn’t until 1842, when Cornishman William Lobb, after seeing the unusual trees at Kew, traveled to the border of Argentina and Chile to bring back the exotic seeds. He managed to secure more than 3000 seeds, enough to make him and his bosses very wealthy men.

Word of the strange new tree spread like wildfire in Victorian Britain, and soon everyone wanted one as the centerpiece of their garden. Gone were the days the silent reverence of the Pehuenches, for they were now the talk of the town. Seen as a display of wealth, many landed gentry competed to have the most spectacular specimens. On the grounds of Bicton Agricultural College in Devon, this is taken to an extreme, with a full street lined with the trees. The Monkey Puzzle Avenue is said to be the longest avenue of monkey puzzles in Europe, and can still be visited today. 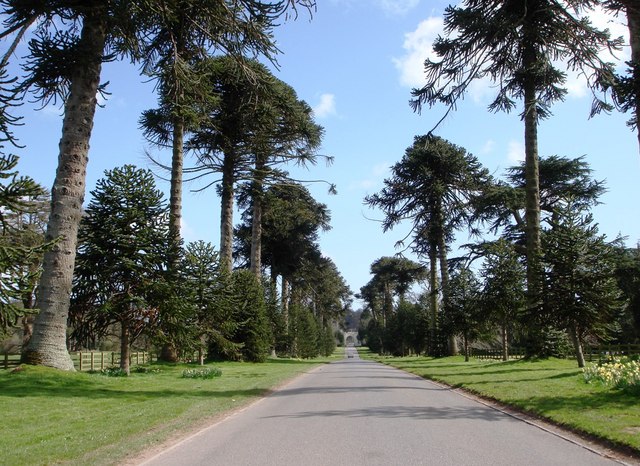 Just where did the name ‘Monkey Puzzle’ come from?

The name comes from this period, when the trees were still relatively uncommon. Sir William Molesworth had purchased one of the first available trees for his garden at Pencarrow House. While showing the tree at a dinner party, barrister Benthamist Charles Austin joked that climbing the sharp, interweaving branches of the tree ‘would be a puzzle for a monkey’.

This likely got quite a chuckle, succeeding in conjuring images of the wild and uncivilized New World, but it couldn’t have been further from the truth. Not only do araucaria trees pre-date the evolution of monkeys by at least 60 million years, there are no monkeys in their high altitude habitat. Despite this, the name stuck, replacing the unimaginative (and botanically incorrect) name Chilean Pine in common usage.

The young alien looking trees were a sensation, but they quickly outgrew the gardens in which they had been planted. Monkey puzzles can grow to more than 50 meters (160 feet) tall, and tend to lose their curious pyramid shape for a more umbrella like one as they grow. They eventually fell out of fashion, although they can still be seen in countless gardens around the country.

The plight of the Araucaria

Meanwhile, back in Chile, the trees were exploited for another reason: their timber. Since they grow straight and produce few knots, the trees were heavily logged for use in shipbuilding and railroad construction. The practice was eventually banned in 1990, but by then the tree was already listed as endangered.

Today, a new danger is threatening to change the native habitat of the araucaria. The Chilean government, in an effort to generate hydroelectric power for its citizens, has approved the flooding of Andean valleys. This, combined with disease and invasive species, means that the trees are in need of human intervention.

One such effort is the Internationally Threatened Conifers in our Care (or iCONic) project at the Royal Botanical Gardens Edinburgh. Working with the International Conifer Conservation Program (or ICCP), they collect monkey puzzle trees and other endangered conifers from around the world and propagate them in Scotland, where conditions allow them to thrive.

Although these efforts won’t bring the trees back to their former prominence, they will protect them until bigger efforts are made to replant them. Until then, at least they can be admired in botanical gardens around the world. 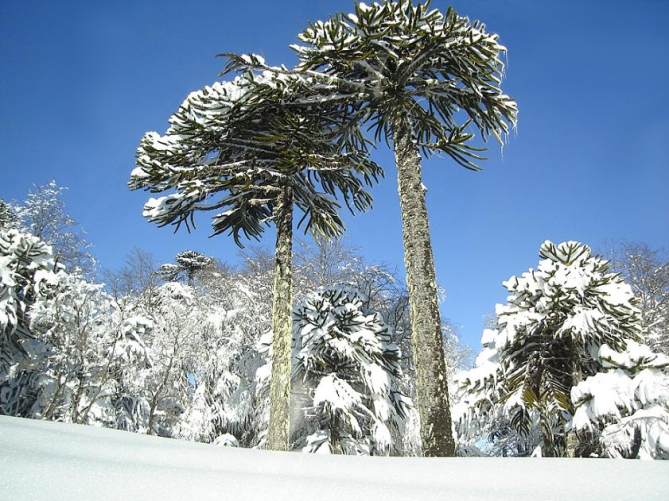 Want to see one in person? Fellow blogger Sarah Horton has created a Monkey Map of countless monkey puzzle trees around the world. The project was discontinued in 2016, but her website still contains 3 years worth of information. Check it out!

If you enjoyed this article about monkey puzzle trees, check out the archive for more tree stories. Also check out the Facebook page, with a few extra tree goodies throughout the week. Subscribe below to receive notifications whenever a new tree story is published.