Thanks to the legend of Robin Hood, Sherwood forest has become one of the most well known places in all of England. It attracts up to 1 million tourists each year, many of which are looking to capture some of the magic of the legend. One of the largest oak trees in the country, the Major Oak, is right at the center of the legend as the reported home base of Robin and his band of merry men.

The earliest records of Robin Hood date back to the 13th century, and by the 16th century it was well established folklore. The legend goes that the skilled archer and his band of outlaws stole from the rich and gave to the poor in and around Nottingham forest. They managed to evade the long arm of the law by hiding out in Sherwood forest, which at the time was much larger than it is today at nearly 100,000 acres. It also contained one of the main roads leading from London to York, providing lots of opportune victims.

The history of Sherwood forest goes back much further than any legend. Remnants of ancient pre-ice age hunter gatherers have been found in the forest, but by the end of the Roman period farming was much more common in the region. Many of the current day towns and cities in Nottingham date back to the Roman period. 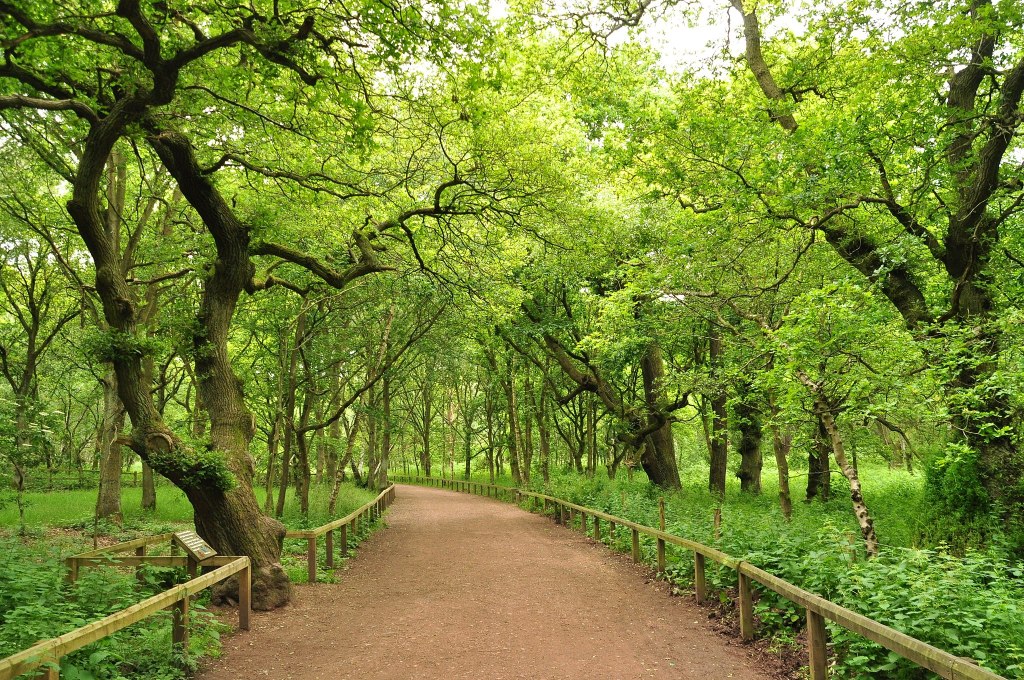 After the Norman invasion in the 11th century, Sherwood forest became a popular royal hunting ground. This is the period that Robin Hood and his merry men were supposedly stalking the forest, but it was far from unknown wilderness by then. It was a valuable source of game, timber, and entertainment.

The Major Oak also dates back to this period. The enormous Quercus Robur has a trunk that measures more than 10 meters (35 feet), and is estimated to be between 800 and 1000 years old. The trunk is hollow, with a cavity that’s big enough to fit 34 school children. How exactly it came to be so large is unknown, but some speculate that the tree is actually several oak trees that fused together over time. Others think that it’s the result of an extreme case of pollarding, a technique used by forest managers to increase the timber yield of a single tree. 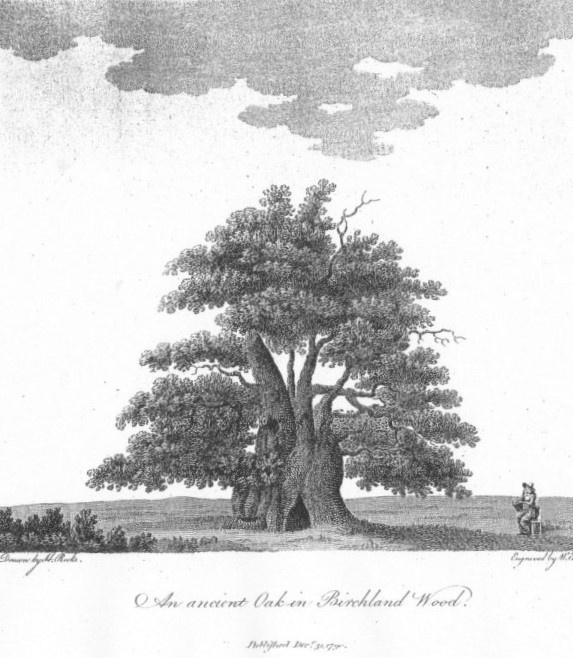 The tree takes its name from local historian and archaeologist Major Hayman Rooke, who wrote about the tree in his 1790 book “Remarkable Oaks in the park of Welbeck in the county of Nottingham”. Contrary to popular belief, it’s not the ‘major’ or largest oak in England, but comes from ‘the Major’s Oak’. Prior to that, it was known as the ‘Cockpen tree’, due to its use as a pen for hunting birds before their release into the cockfighting pen. It’s easy to see why the name Major Oak caught on so quickly.

Thanks to the tree’s historical and environmental significance, the tree became a popular tourist attraction in the Victorian era. Although locals had known about the tree for a long time, visitors would take the train to Edwinstowe then take a carriage to the venerable tree.

All of this activity meant that the tree needed protection, so wooden poles were used to prop up the largest branches, and chains were used to support those higher up in the tree. This worked for a while, but by the 1970s the tree was receiving hundreds of thousands of visitors a year, and their footsteps were compacting the soil beneath its 2 meter (92 foot) canopy. A fence was installed to give the tree some breathing room, and later on the grass surrounding it replaced with mulch to make sure rainwater makes it to the tree’s roots.

Nowadays a team of tree surgeons inspects the tree each season to make sure it’s healthy and growing well. The ancient oak continues to be one of the most popular trees in the country, and was voted England’s Tree of the Year in the inaugural edition of the European Tree of the Year competition.

With such a strong conservation effort, the tree is sure to continue to bring awe to visitors for generations to come. And thanks to the efforts of John Palmer, perhaps even longer. He collected acorns from the tree and planted a forest of 300 ‘mini-Major Oaks’ to continue the tree’s legacy. They’ve been growing for more than 15 years now, and with luck they’ll outlive their common ancestor by centuries.

If you enjoyed this article about the Major Oak, check out the archive for more tree stories. You might enjoy reading about another tree associated with Robin Hood, the Sycamore Gap tree. Also check out the Facebook page, with a few extra tree goodies throughout the week. Subscribe below to receive notifications whenever a new tree story is published.