The desert is by no means a hospitable place, especially if you don’t have the ability to seek shelter from the unrelenting heat of the sun. But a single tree managed to survive the arid wasteland for several hundred years. What it couldn’t survive, however, was a careless truck driver who somehow managed to hit the only obstacle in a 800 km (500 mile) stretch of wasteland.

The Tree of Ténéré was an acacia tree (although it actually belonged to the vachellia genus) located in the Ténéré desert in northeastern Niger, and despite its fame for being solitary, it was once part of a much larger grove of trees. In fact, thousands of years ago the area was likely entirely covered in forest. As the climate changed over time and rainfall became more scarce, the number of trees dwindled.

While it isn’t the only tree in the desert, by the time it was recorded for the first time by Westerners, it was surrounded by more than 400 km (250 miles) of nothing but sand in all directions. Virtually all local maps featured the tree, since it was one of the only notable features of the landscape.

As a result, it became a local landmark, used to guide caravans and travelers as they made the dangerous journey. For hundreds of years traders led camels carrying salt, dates, and other goods through the desert, all stopping at this one sacred location.

The famous acacia tree in 1939

When the commander of the Allied Military Mission, Michel Lesourd, saw the tree in 1939, he was astonished that anything could live in such conditions.

One must see the Tree to believe its existence. What is its secret? How can it still be living in spite of the multitudes of camels which trample at its sides. How at each azalai does not a lost camel eat its leaves and thorns? …The only answer is that the tree is taboo and considered as such by the caravaniers.

There is a kind of superstition, a tribal order which is always respected. Each year the azalai gather round the Tree before facing the crossing of the Ténéré. The Acacia has become a living lighthouse…

The tree’s role as a ‘lighthouse’ of the desert and gathering point eventually led to officials drilling a well in 1938. As they drilled deeper and deeper to find a source of life saving water, they discovered how the tree had managed to survive for so many centuries – its roots crept 35 meters (110 ft) beneath the surface and into the underground source of water. 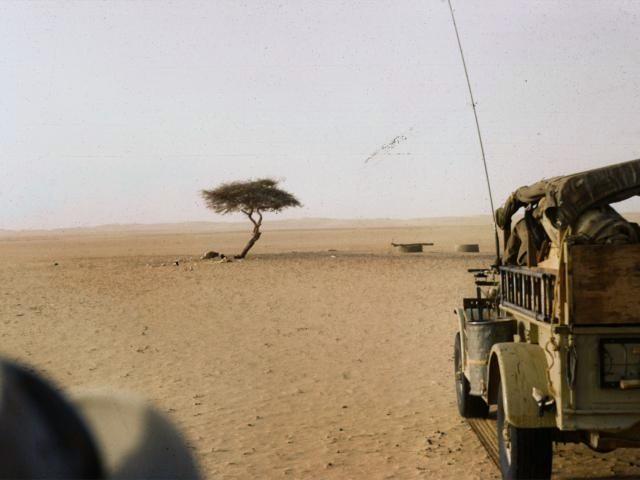 The Tree of Ténéré in 1961 – photo credit Michel Mazeau

The tree itself was only a couple of meters tall with few living branches, but it still clung on to life to serve as a testament to the resilience required for hardy desert people to survive. But a double whammy of back luck would cut the tree’s life short – literally.

The Tree of Ténéré’s first run in with automobiles came some time in the 1940s, when a careless driver somehow smashed into it with his trunk, knocking down one of its two brittle trunks. The driver then hacked the tree off at the stump, likely in an effort to hide what he had done. The tree which was so special to the local people was irrevocably damaged, but managed to survive the incident.

It was another absent-minded truck driver that would eventually bring an end to the tree’s story. In 1973, the final remain trunk was struck by a Libyan truck driver, snapping it in half and killing the tree. There is some speculation that the driver was drunk, but there is no proof that this is true. Perhaps he was asleep at the wheel, or a sudden wave of dust obscured his vision. In any case, after hundreds of years, the tree met the same fate as the rest of its kin.

The tree’s remains were taken to the Niger National Museum in Niamey later that year, and a tribute was built in the tree’s place. The monument was made of scrap metal and can’t compare to the unique beauty of the original tree. It looks more like an antenna than a tree, but at least it’s something. A year after the tree’s demise, the Republic of Niger released a commemorative stamp with a photo of the legendary tree.

At the 2017 edition of the annual Burning Man festival another tribute to the Tree of Ténéré was constructed with the help of hundreds of donations from around the world. The three story tall installation featured more than 25,000 LED-infused leaves that lit up in coordination with music and movement.

We were inspired by a tree that once grew in the middle of the Sahara desert, in a region called Ténéré. It was the most isolated tree on Earth: not a single other tree could be seen for 250 miles. And yet, the tree became an important ceremonial gathering place for traders and travelers as they crossed the desert. It brought people together for community, ritual and rest.

Although the tree has been dead for more than 50 years, its legend lives on. The tree’s incredibly ability to survive in the otherwise desolate wasteland was only surpassed by its poor luck. The only real mystery left in the story is how in the world two separate drivers managed to hit the only living thing for hundreds of miles.

If you enjoyed this article about the Tree of Ténéré, check out the archive for more tree stories. Also check out the Facebook page, with a few extra tree goodies throughout the week. Subscribe below to receive notifications whenever a new tree story is published.